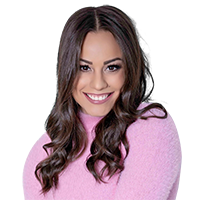 Every weeknight and Sunday too, join Elaina starting at 7 for one on ones with your favorite artists, entertainment and music news, 10 in a row country and more!

California native, Elaina D. Smith has become one of the strongest female presences on Country Radio. While working at Entertainment Tonight and The Insider in L.A., Elaina found her true passion when she got an opportunity to work with the wildly popular Dave, Shelly and Chainsaw morning show. Elaina caught the radio “bug” and never looked back. After that, she hosted shows in San Diego, and Florida and Cumulus Media’s Mike McVay took notice. In 2014, he tapped Elaina as co-host of NASH Nights Live. Elaina starts her seventh year in syndicated radio as the solo host of Nights with Elaina in 100 markets.

Her last six years in Nashville were very busy as Elaina expanded her brand. From Red Carpet coverage of major award shows (all formats), to welcoming stadium crowds at Country Music Festivals, and participating on key industry panels, Elaina’s hard work has been recognized by her peers. She was recently named one of RadioInk’s 30 and Under Superstars.

Elaina is also a two-time Gracie Award winning, CMA and ACM nominated broadcaster, who even added “actress” to her resume when she was asked to appear as herself opposite Hayden
Panettiere on CMT’s drama Nashville.

In 2018, Elaina launched her award-winning podcast, Breaking Thru with Elaina (formerly “Women Want to Hear Women”) a female focused podcast that has featured in-depth conversations with artists like Carrie Underwood, Dolly Parton, Trisha Yearwood and Maren Morris. Elaina’s podcast gives female artists a place to be heard on their experiences, and to have an honest conversation about the female airplay imbalance on Country Radio, and other industry areas where women have a tougher hill to climb. BTWE also celebrates the women who are breaking thru and hopes to inspire those who are chasing their dreams.

In 2019, in addition to NASH Nights Live, Elaina launched a two-hour syndicated weekend product via Westwood One, called With Elaina. With the Country genre becoming more mainstream, Elaina chats with the biggest stars in Country Music about their life, pop-culture, nostalgia and so much more. She also highlights her own life and gives real perspective on whatever is happening in the world. Some of her celebrity co-hosts have included Garth Brooks, Thomas Rhett, and Keith Urban.

When she’s not working, you’ll probably find Elaina with her rescue dog Zoey, or watching The Office on Netflix for the 278954234th time. If not, she’s likely at the gym, discovering new music around Nashville, volunteering at her local animal shelter, at a Disney park, or covering a song on YouTube.

Find/Follow her @ElainaDSmith across social media. 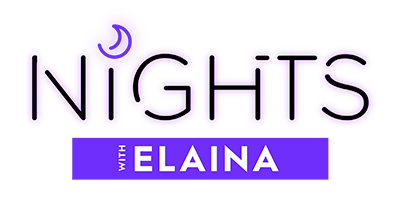 Personalities Associated with the show: